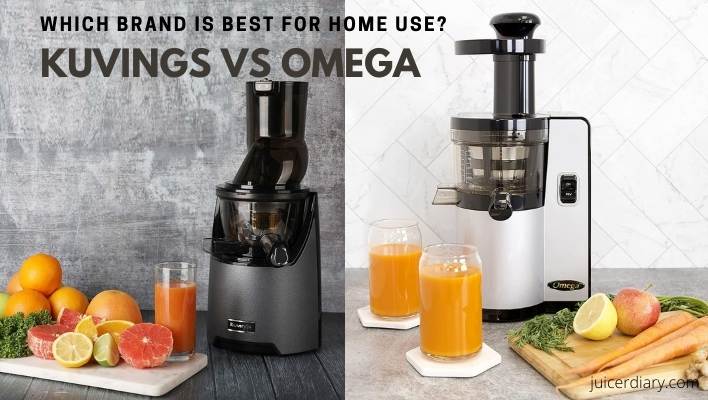 According to studies, the market for juicers is expected to reach $4 billion by 2027. It conveys that people are growing their interest in getting their hands on fresh, handmade juice.

Juicers are, without a doubt, a fantastic way to juice at home. However, there are numerous sorts and brands to select from. Which method is the most efficient? Confusion emerges when your mind swings between two exceptional brands, such as Omega and Kuvings.

That is why we are comparing the Omega juicer vs Kuvings, or more precisely, the Kuvings EVO820 vs Omega VSJ843 vertical slow juicers today to determine which one is better for you.

Omega Vs Kuvings: Which One Is Best?

Omega is a well-known juicer company that has been in business for more than 30 years and is one of the largest in the world. In fact, no other brand has the same level of recognition.

Omega creates juicers in a variety of forms, including citrus, centrifuge, pulp ejection, and low-speed mastication. Omega offers industry-leading warranties that are backed by innovation and quality.

Kuvings is another well-known kitchen equipment company that began operations in 1978. Kuvings is derived from the German words “Kuche,” which means “kitchen,” and “well being, living.”

Kuvings, unlike Omega, is not a company dedicated only to the production and sale of juicers. Blenders, grinders, extractors, and other kitchen appliances are also made by the company. Some of its other products, such as the yogurt maker, are even more popular than the juicer.

As a result, both brands have their own recognition and popularity. We must compare the exact products from both to determine which is superior. We chose to compare Kuvings EVO820 with Omega VSJ843 since they are the most widely used.

Because both juicer models are well-known in their respective fields, we can determine which one is best for us by looking at the specifics of each. So, let’s take a look at the Kuvings juicer vs Omega comparisons below.

Which One Is More Stylist And Kitchen Friendly?

Kuvings evolution cold press juicer is a premium vertical juicer from Kuvings. It has a sleek spherical shape with a leather finish body that will bring elegance to your kitchen. Kuvings whole slow juicer took up the smallest amount of counter space with its 9 and a half-inch width and 8-inch depth. It is, however, slightly taller than the Omega vertical juicer, around 3 inches, which may pose some challenges when placing it in your kitchen cabinet.

Omega vertical low-speed juicer, on the other hand, comes with a compact square shape body to provide more stability during spinning. You will find it in two stunning colors – red and silver, giving you the choice to purchase by matching with your kitchen decor. When the Kuvings evolution model comes with a bit tall feed tube, Omega offers a little short height, allowing you to store it in your kitchen cabinet conveniently.

Keynote: Therefore, you can choose anyone based on your storage convenience and personal preference in terms of style and design.

Differences Of Speed And Motor Power

When it comes to masticating juicers, speed is a major consideration. We also noticed that both competitors have low-speed rotation. The Omega VSJ843QS has the lowest rotational speed (43 RPM) of the two.

However, when we compare motor power to speed, we can find that the Kuvings evolution cold press juicer has a higher wattage and a little more speed. This means it will provide more fine grinding and squeezing. As a result, it can juice a wider variety of fruits and vegetables in less time than the Omega vertical slow masticating juicer.

On the other hand, despite the fact that the speeds are not dramatically different, Omega VSJ843 will provide you with a few extra nutrients during juicing because it produces less heat.

Keynote: Kuvings EVO820 is a good option if you want your juice faster. If you’re looking for a particularly nutritious juice, though, Omega VSJ843QS is the brand to go with.

What Kind Of Produces Can They Process?

Both juicers can handle practically any soft or thick produce, from leafy greens to citrus, fruits and vegetables, nuts and soybeans, and anything in between. You could also make smoothies and sorbet with them.

Let’s take a look at some of the products they can handle:

Keynote: There is no clear winner; you may choose any of the candidates based on these criteria. Customer feedback indicates that Omega is excellent for extracting juice from leafy greens and wheatgrass, whereas Kuvings can help you make smoothies, baby food, nut milk, and sorbets in addition to juicing various fruits and vegetables.

Differences In Performance And Juice Quality

The Kuvings EVO820 has a higher power engine that helps the user to attain optimum speed in the shortest amount of time while also providing adequate torque to quickly grind and squeeze any tough produce. The Omega VSJ843 motor, on the other hand, is ideal for producing low speed for less oxidation. Because the speed difference is minimal, both may produce a nearly dry pulp and a large amount of juice.

Aside from a powerful engine, the EVO820 boasts a wide-mouth feed chute that helps you save time in the kitchen. Apart from pre-cutting, both juicers take almost the same amount of time to extract juice from the same amount of produce. Despite the fact that the EVO820 has a broad opening, when juicing leafy greens such as wheatgrass, you must cut them into short pieces for a greater yield.

The Omega VSJ843 features the world’s first SST (slow squeezing technology) and AWS (automatic wiping system). With SST, you’ll receive the most nutrients, vitamins, and juice from the smallest amount of produce. You can store your juice for up to 72 hours after extraction because it produces very little heat while running and very good quality juice.

You will get excellent quality juice from the Kuvings EVO820 as it is equipped with a double-cut titanium screw to finely grind the produce to extract maximum nutrition with no pulp left behind. As it runs at a very low speed than the centrifugal juicers, it produces very little foam or oxygen. As a result, you will get highly nutritious juice full of vitamins and minerals from it. You can store the extracted juice for up to 3 days.

Keynote: Despite its low speed and low wattage motor, the Omega VSJ843 extracts juice more quickly and leaves less pulp. However, both the juicer can produce the same amount of tasty and healthy juice. As a result, there is no clear winner in this category too.

What Component And Accessories They Have?

Omega VSJ843QS slow masticating juicer comes with a juicing screen, an auto cleaner, a juice bowl with a lid (plastic), a pulp bowl (plastic), and a cleaning brush.

Keynote: You will find every useful accessory in the Kuvings EVO820 to make juice, smoothies, and other food. But Omega comes with only juicing components.

Which One Is More Noisey?

Both juicers create nearly no noise while running because they are low-speed masticating juicers. During juicing, you’ll hear a faint hum from the engine and the crunching of fruits or vegetables.

Keynote: In this case, both juicers are on the same side.

Which One Is Easier To Use And Cleanup?

We found both juicers are user-friendly. Kuvings slow juicer has a large opening that reduces pre-cut time and a pusher that saves your hand. A flap gate is located in the feed tube to allow for the pouring of small pieces of vegetables or leafy greens while also preventing small children’s hands from entering. It also contains a sensor that prevents it from starting until all of the components are in working order.

The Omega vertical juicer, on the other hand, has a slightly smaller opening that necessitates pre-chopping the fruits or vegetables into small pieces prior to feeding. It contains a reversal button that allows you to revolve the auger anti-clockwise if it becomes clogged.

Both juicers use non-drip dispensing systems to manage and mix juice inside. As a result, you can juice as much as you like and pour it into the jar whenever you want. The juice tap can also be used to produce almond milk.

When it comes to cleaning, you’ll find that both juicers are quite straightforward to disassemble, although none is dishwasher safe.

Cleaning the Kuvings juicer will take roughly 5-7 minutes. It offered a wide range of brushes and cleaning supplies to make manual cleaning easy. It is, however, a little tricky to dismantle for beginners.

On the other hand, the Omega vertical juicer has an auto-cleaning system that helps keep the screen clear and reduces the need for manual cleaning. It is easy to dismantle too.

After juicing, do not leave the juicer uncleaned since this will allow the pulp to dry in the mesh screen, making it more difficult to clean later.

Keynote: While neither is dishwasher safe, Omega is a little easier to clean and disassemble. However, Kuvings’ wide mouth comes in handy when it comes to user-friendliness and time savings.

Which One Is Costly?

You can purchase Omega VSJ843QS by spending a little above $450, whereas you will need almost $600 to get a Kuvings EVO820. However, you will find both the juicer made with durable materials, a powerful motor, and the most upgraded features for user-friendliness.

Keynote: So, while the Kuvings whole slow juicer is more expensive than the Omega vertical juicer, both offer excellent value for money.

Omega offers a 15-year warranty for its VSJ843 model, whereas you will get 10 years warranty for the Kuvings EVO820 model juicer.

Keynote: Omega VSJ843 is the winner of this category. However, you will find excellent customer service from both the company.

We can see from the preceding comparison of Omega juicer vs Kuvings that the Kuvings EVO820 has a more powerful engine and a wider chute, allowing it to accept a bigger volume of goods at once. It also has a faster RPM, indicating that it operates faster.

The Omega VSJ843QS, on the other hand, has a high torque motor that rotates at a low speed to produce nutrient-rich juice. It is less expensive and easier to clean and use than the Kuvings whole slow juicer.

Finally, if you want a juicer that will grind up whatever you put at it and is extremely robust, the Kuvings EVO820 is the way to go. The Omega VSJ843 juicer, on the other hand, is the perfect option if you want something cheap and easy to clean.

It is necessary to inform that juicerdiary.com is a participant in the Amazon Services LLC Associates Program, an affiliate advertising program designed to provide a means for sites to earn advertising fees by advertising and linking to amazon.com.