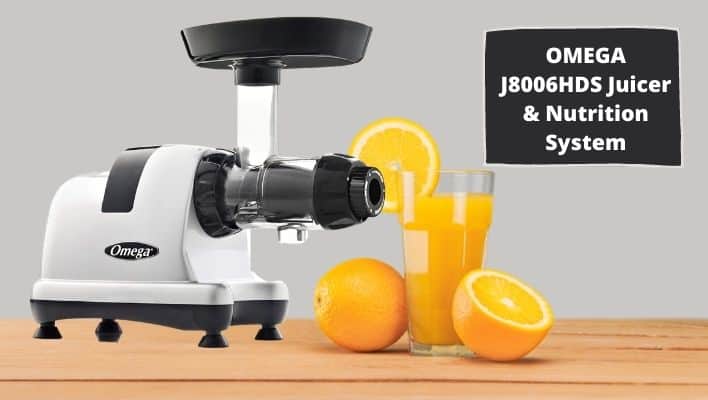 This website is supported by readers. As an Amazon Associate we earn a commission from qualifying purchases without incurring any cost to you.

When it comes to juicing greens and getting healthy one thing that appears in our mind is the quality of our drink. Am I getting the most out of my glasses?

It’s a very reasonable concern for a juicing enthusiast. Many of us thus opt for slow masticators knowing that these juicers outperform all other variants in this respect.

Talking about masticating juicers, their ability to squeeze most nutrients out of leafy greens is unparalleled. As a result, you don’t get messed up, rather able to put in all the goodies of your vegetables at the expense of only a few extra minutes.

And if you are wondering what is the best juicer in this category, Omega J8006HDS Nutrition Center is the answer. In this article, we’ll review this outstanding juicer and share all the details with you.

Before we get into this, let’s take a quick look at the key features of the Omega j8006hds juicer followed by the corresponding pros and cons it comes with.

Click Here To Check The Latest Price On Amazon

Key Features at A Glance

Omega 8006 nutrition center is a cold press aka masticating juicer that processes your fruits and vegetables at 80RPM only. Thanks to its gear reduction feature, this low speed prevents oxidation ensuring that most healthy enzymes in kept in your juice. This also implies that you can store your drink up to 3 days before the quality degrades.

Unlike centrifugal juicers, it utilizes a dual-stage system so that the yield is maximum. Credit should also be given to its extremely durable auger. When it seems a bit exaggerated, the manufacturer claims that it is 8x stronger than plastic.

Omega 8006 doesn’t take up much storage space and follows a relatively smaller footprint. However, the main attraction of omega j8006hds juicer has to be the number of recipes it can produce. At the convenience of a single unit you can make:

Moreover, when most juicers are labeled as hard to clean, it is far from being true with Omega J8006HDS Nutrition Center. It’s dishwasher safe and there are minimal parts that need cleaning.

J8006HDS is the 5th generation of Omega juice extractor that boats a commercial-grade construction with noticeable improvement from its predecessor (Omega J8006). For instance, it incorporates a larger juicing screen that resembles the power of a 2HP motor compared to just 1/3HP.

Thanks to its stainless-steel housing, the juicer packs a lot of resilience. Apart from this, the manufacturer offers a 15-year warranty which represents the level of durability in its construction.

The juicer comprises a powerful 200-watt motor along with a strong auger (GE Ultem material) so that it can slice through harder ingredients (like carrots) without issues. This also comes in handy when you’re looking to increase the volume of your juice.

The package includes separate nozzles and parts for mincing allowing you to make sorbets from a wide range of fruits and vegetables, also nut butter, pasta, flour, baby foods, etc.

Omega J8006HDS offers all features of a masticating juicer including low-speed operation (80 rpm). This performance is largely attributable to its dual-stage system.

At the first stage, the item goes through the drum and the auger crushes them. Then they are pressed against the metal screen where the juice gets separated and the pulp is pushed out of the end cap.

Due to this controlled pace, the juices you produce are less exposed to oxidation. In the end, you get freshly squeezed juice full of flavor, vitamins, and minerals.

This incredible appliance comprises only four components that need to be separated once you complete juicing. The parts are dishwasher safe (except the filter), so you can rinse them under warm, soapy water and wipe with a towel subsequently.

However, before you do that remember to utilize the cleaning brush and remove leftover pulp from its sieve and juicing screen. Eventually, cleaning will become a lot easier for you.

Omega J8006HDS comes with a simplistic horizontal design easy to work with and fits every countertop seamlessly. You can set things up in less than a minute. It has a larger food tray that allows you to place and organize more fruits and juice them.

On the downside, the narrow feed chute (1.5-inch round) will make juicing a bit slower as you have to slice your foods into smaller pieces. However, the plunger you get will help you push the produces down the tube. Last but not least, it has four legs at the base that helps stabilize the juicer during use and mitigate noise.

Recently Omega launched a newer juicer series NC, which is the 6th generation of Omega Juicer. Both Nc900 and 800 are similar in terms of the features they offer except for the color. HDC comes with a chrome finish, whereas HDS incorporates a silver line.

The difference between j8006 and nc800 mainly comes down to their feeder chute and end cap. NC series offers a bit larger chute that measures 2-inch in diameter rather than 1.5-inch on j8006. So, if you are looking for a masticating juicer with a wider chute and want to reduce your prep time, Nc900hdc or Nc800hds would a better investment.

Unlike j8006, NC series also introduces a pressure adjustment knob on the front of its end cap. This allows you to better control the quantity of pulp and lets you decide whether you like to get more juice out of your fruits/vegetables.

Other than that, J8006 has a better edge with is 200—watt powerful motor instead of 150-watt in NC series. With that being said, both J8006 and Nc800/900 are extremely versatile and capable of producing high-quality juice from all kinds of produce, and you can’t go wrong with either of the juicers.

Omega J8006HDS is a cold press juicer, also known as masticating juicer in a wider term. Due to its nature, it can juice a small number of leafy greens, yet produce a much higher yield. Comparing to centrifugal juicers the resulting juice will be less foamy and smoother as well.

By and large, masticating juicers are the best type to turn frozen fruits into sorbets. Omega J8006 is not an exception. It comes with a special attachment that lets you do this. However, keep in mind that adding more frozen fruits than liquid may make the mixture stiff.

J8006 is the mainstream Omega juicer (best seller) and is placed just below the NC Series in the rankings. The latest MM series is quite similar to J8006, but they have a separate attachment to juice celery. However, MM doesn’t have the non-juicing functions that J8006 offers.

According to the manufacturer, all parts of Omega J8006 that come in contact with your juice are BPA-Free. Additionally, the juicing screen is made of stainless steel which is a big plus.

Yes. Replacement parts are available for Omega J8006 Juicer including but not limited to nozzle, juicing screen, auger, drum unit, and plunger pusher.

This juicer offers a 72 hours shelf life, and able to produce a great deal of yield. Busy folks and those who run a big family will appreciate this juicer. However, if you want to juice in a jiffy, Omega J8006HDS may not be an ideal option for you.

If you’ve come to this point, you already know the belt and whistle Omega J8006 nutrition system comes with and why it stands out from the rest of its competition. Frankly speaking, juicing with omega 8006 can be very rewarding especially if you plan to include a lot of vegetables in your diet.

It doesn’t come cheap though, however, the functionality of the omega J8006hds nutrition center goes beyond that of a juicer, and the price you pay worth it completely.